You are here: Home1 / History Hub2 / Writing3 / Spare a thought for the Bomber Boys: The unknown air campaign of 1940

Whilst the troops at Dunkirk struggled to get away from the German onslaught and Fighter Command kept up dawn-to-dusk combat air patrols, spare a thought for the Bomber Boys.

Flying obsolescent aircraft, often without clear objectives, target restrictions and little good intelligence, the aircrew of Bomber Command raided Germany and the Low Countries to both support the tactical objectives and begin the fight back.

RAF Bomber Command had suffered since its inception in 1936 with the original notion that the ‘bomber will always get through’ and an early impression which made it seem that Battle, Blenheim and Wellington would be faster than contemporary fighters and therefore reach their targets even in daylight.

Designed in 1934, the Bristol Blenheim was the first ‘modern’ aeroplane in the Royal Air Force. A monoplane, constructed with a stressed-skin fuselage and powered by the latest radial engines, it was faster than all British fighters then in service. So fast, was the Blenheim that some models were indeed classed as fighters.

Group Captain (later Air Commodore) A D Panton, renowned Blenheim pilot, shot down three times in the Battle of France, captured PoW – his diaries are Six Weeks of a Blenheim Summer which will feature at CVHF in our Pop Up History programme

The first British aircraft to cross the German coast on 3 September 1939 was a Blenheim, winning the Distinguished Flying Cross for Flying Officer McPherson of No 139 Squadron. A Coastal Command Blenheim sank the first U-Boat of the war on 11 March 1940 and by April, French-based Blenheims were mapping the Franco-German border; something which the French had neglected in the 20 years since the Treaty of Versailles.

There was great optimism that the Blenheim would be able to dent any German advance into France.

The reality was different. The losses were huge. The effect was limited.

By early 1940, the deployment of the Luftwaffe’s Messerschmitt Bf 109, tested in combat in Spain, had proved that daylight bombing without an overwhelming fighter escort would be prone to higher loss rates than would be sustainable. The Aalborg raid on 13 March 1940 resulted in No 82 Squadron ceasing to exist as 11 out of 12 Blenheims were shot down by fighters or flak – the 12th Blenheim had returned to base early with engine problems. It was the greatest proportionate loss of any military operation in the Second World War – yet still the Blenheim crews climbed into their bombers very day and flew eastwards.

In May 1940, when Germany invaded France, the Hurricane fighters in France fully occupied with air defence by the wasteful tactic of standing patrols – France had no radar and no ground-air coordination – there were very fewer opportunities for close escort to protect the bombers against the Luftwaffe. In consequence, the bomber crews were being asked undertake flights into the unknown.

Read any account of the period – and ‘Six Weeks of a Blenheim Summer’ must be the standard against which others are judged – and the valour of every pilot, navigator and air gunner, as well as those groundcrew often left to fend for themselves, comes over.

Yet, day after day, and increasingly, night after night, bomber crews would fly off into enemy skies and make their contribution. The Blenheim was still in service in Malta and the Far East in late 1941 and still sustaining losses.

Bomber Command will be remembered at Chalke Valley History festival this year with displays by the only flying Bristol Blenheim in the world and the UK’s only flying Avro Lancaster, the iconic British bomber. Paul Beaver will be commenting on the flying and the leading the discussion on Sunday, 28 June with a complete Lancaster bomber crew. It is also hoped that Victoria Panton Bacon, author of Six Weeks of the Blenheim Summer (about her grandfather’s tour of duty in France 1940) will be joining Paul in the commentary box.

🎧 CHURCHILL: THE ORIGINS OF GREATNESS 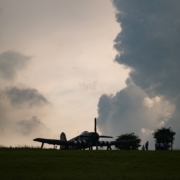 🎧 TYPHOONS AND THE EFFECT OF AIR POWER

War Horse and Private Peaceful: Writing about World War One

The Trigger: The Journey That Led The World To War In 1914
Scroll to top