You are here: Home1 / History Hub2 / Game of Queens

The sixteenth century saw an explosion of female rule. Large swathes of Europe  – France, England, and the Netherlands, Spain and Portugal, to say nothing of Hungary and Scotland – were at one time or another controlled by a woman, whether as regent, or as reigning queen or a female regent. Many of them were linked by a complex web of interrelations – as mothers and daughters, mentors and proteges. Lessons passed from Isabella of Castile to her daughter Katherine of Aragon, and on to Katherine’s daughter Mary. From the French regent Anne de Beaujeu to Louise of Savoy, through Louise’s daughter Marguerite of Navarre to her own daughter Jeanne d’Albret), as well as to Marguerite’s admirer Anne Boleyn and finally to Elizabeth.

Some of these women are household names; others virtually unknown to many of us in the English-speaking countries. But the female rulers of Europe themselves recognised bonds of sisterhood stretching across the borders – sometimes even running contrary to the interests – of their countries. And, sometimes, they consciously invoked their status as women to conduct business in a different way.

In the sixteenth century – as in our own! – the phenomenon of the powerful woman seemed to offer both challenges and opportunities. Opportunities, as when in 1529 Margaret of Austria and Louise of Savoy negotiated the ‘Ladies’ peace’ of Cambrai. Challenges, as when sexual scandal threatened Elizabeth I, and destroyed both her mother Anne Boleyn and her rival, the Scots queen Mary. This earlier Age of Queens did not outlast the sixteenth century – the more so since women found themselves at the forefront of the great religious divides which tore Europe apart. But the sheer scale on which the women of the sixteenth century exercised power (as well as the challenges they faced) remains both a spectacle and a source of warning right up to our own day. And I’d say it’s no coincidence that it was in this era the chess queen got the powers we know today . . .

Sarah Gristwood has written bestselling biographies of Arbella Stuart, and Elizabeth and Leicester. Blood Sisters was a dramatic portrait of the women whose dynastic ambitions and rivalries fuelled the Wars of the Roses and her latest book is Game of Queens: the Women Who Made Sixteenth-Century Europe. She will be speaking at Chalke Valley History Festival on 27 June on this subject. Tickets available here. 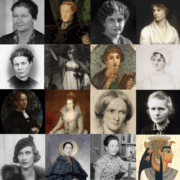 10 Facts About The 16th Century ‘Game of Queens’

Herodotus: Reflections on Tolerance and the Foundations of Democracy

These cookies collect information that is used either in aggregate form to help us understand how our website is being used or how effective our marketing campaigns are, or to help us customize our website and application for you in order to enhance your experience.

If you do not want that we track your visit to our site you can disable tracking in your browser here:

The following cookies are also needed - You can choose if you want to allow them: